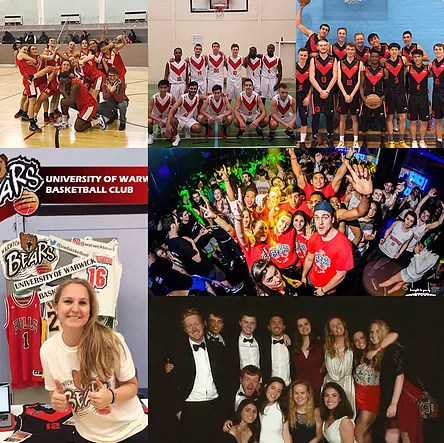 Term 1 has flown by! We hope everyone has had an enjoyable first term and are having a good Christmas break so far. Since September the Basketball Club has done a lot - we have run successful beginner's sessions (featuring our new Level 2 coach) and club open sessions, we have enjoyed an action packed WBL and the competitive teams have done well in their leagues so far. We have taken members to a level 1 coaching course to improve the standard of coaching at beginners' sessions and to enhance the term 2 schools volunteering outreach program. We have organised many socials and set up and run a successful Whizz-Kidz charity 3 on 3 tournament and 3 point competition. Top of the table, the Women's BUCS team is undefeated in all competitions while the Men's 1st team sits in 3rd place, still aiming for promotion, in a very competitive league. New in BUCS this year, the Men's 2nd team are mid-table and have also enjoyed several wins in the local league.

Next term we are running a Table Officiating course which will allow participants to officiate BUCS and local league fixtures and earn some money. We are continuing our volunteering program at a local school and hope to run even more socials and charity events throughout the term. We will continue to run our beginner sessions and club open sessions and hope to run a Wheelchair Basketball event. We are looking into starting up an additional regular women's only session. With the help of Warwick Sport, we hope to run a level 2 referee course which will improve the level of WBL refereeing.

If you have any ideas for future events or questions do not hesitate to contact us on Facebook or by email (basketball.club@warwicksu.com). To leave anonymous comments you can use our new Suggestion Box .

The women's BUCS team has performed really well since the start of the season having won all of the matches they have played, both in the cup and the BUCS league. This unbeatable trajectory has been mainly due to the arrival of a new coach and some new players. Mario Cuenda, the Women's Head Coach, has been able to build on last year's high standard by increasing the intensity of trainings and by creating a competitive but friendly atmosphere. Several of our team members will attend the university Midlands trials that will take place in January, and we hope that some of our players will make the team. Even though we have performed impressively last term, winning games with an average score of 63-32, we are not going to relax in the coming year! Our objectives for the season are promotion to the first division and winning the Midlands Conference Cup, as we have the level and the quality to reach these objectives.

The Second Team has had an up and down first term. The team has shown moments of great quality but also lack of concentration at times. Big wins vs Leicester and Anglia Ruskin prove this, yet there were a couple of close games lost at the end against Loughborough and Lincoln. The 2nd team hopes to improve this term, winning more games and improving on their local league record. There have been some great moments, whether it be travelling away with the team or last second game winners. Hopefully the next term will be one with more Ws!

Throughout the summer and last term, we have been contacting potential sponsors to support the ongoing improvement of the club and to help out with essential costs. I have been unsuccessful in finding a sponsor but we were able to team up with Virgin Media to get our members £35 off broadband. As far as merchandise is concerned, I have been more than eager to help when asked! I found a supplier for the Exec sports fair T-Shirts and started working on the design of new club-wide leisurewear merchandise. I plan on finalising a deal with a temporary supplier due to a university-wide change in supplier. I have gotten in touch with 2 possible collaborating parties but will have all details and products established in the beginning of next term!

Over the past few weeks I have been working on organising the outreach programme teaching basketball to primary school children. I have introduced the volleyball team this year to the program in a hope to expand and offer more exciting skills for the children. I have been emailing and messaging both volleyball and basketball players that have volunteered in order to ensure that they have been doing what they need to in terms of completing courses and handing in documents. I have also been trying to organise the best day to do the visit to the school by emailing representatives of the school and university.

Once the sessions start we plan to teach the children the basic rules and skills of Basketball. We aim to improve their dribbling, shooting and passing, hopefully gaining them more confidence in game situations. The ultimate aim is to encourage the children to continue playing sport serving to create a progression of better future players in both sports.

This term I organised and ran the weekly Warwick Basketball League. I had a lot of fun with members of the league every week checking out the matches and experiencing the WBL drama. It was nice to get individuals involved even after the team deadline and encourage people to join in for next term's WBL. Next term I will look to improve the smooth running of the league by sticking to match times better and running an actual scoreboard for clarity. I will also communicate with the refs more efficiently to once again improve the WBL experience. I look forward to seeing you guys next term!

This term has certainly been an eye-opener for this fresh-faced treasurer. There is so much more happening behind the scenes of this basketball team than you (or I) could imagine.

Working closely with our work-a-holic President and beneficent PR exec, we have created a solid platform for the stunning performance of our players. Notably, the girls undefeated season is something I revel in vicariously whilst whittling through my stack of bureaucratic papers. In term 2 I look forward to using my inkling of new knowledge to further promote our players and their training, such as the results of all new basketballs for every team. As an exec I feel achievement when our team achieves. So my goal for the coming year will be to see everyone get the most out their experience.

Happy New Year to all the Warwick Bears!!!

Over the past term I have been very busy promoting the club! Term started off with a bang at sports fair, where flyers, banners and videos had to be prepared. The fair was a great success, so much so that we ended up running out of flyers! More work was soon to follow, as an issue with the hoops in Main Hall caused havoc with the trials schedule, so I had to spend a lot of time getting the word out about the new times! Having set up the blog in conjunction with President Jack, it has been in full flow from the start of the term, with Treasurer Jacob showing a certain flair for writing the entries!

The Instagram and Facebook pages have also been very successful, with ever increasing support on both. Over the next term I aim to continue to have frequent blog posts and keep everyone updated on all club happenings on all social media platforms. With Varsity coming up there will be an especially big push, and the #TeamWarwick campaign will be in full flow! Make sure you get involved and come along and support!

I hope we can continue to go from strength to strength over the next term!